There’s a difference between travelling alone and travelling solo, as I witnessed it first hand. I recently wrote about overcoming my fears, travelling solo and bungee jumping in Rishikesh, one of the most beautiful destinations in India.

Today, women across the globe are striking out against archaic gender norms that seek to serve only those who created them. In this regard, women’s choice to travel solo has become emblematic of a rapidly changing community that is shedding its inhibitions and embracing its freedom. We have an insatiable thirst for exploring the world that exists beyond the doorstep of our own lives, and solo travel is becoming the preferred choice for several women.

Despite my love of travelling, I hadn’t yet garnered the courage to head out alone. In retrospect, I realise that my idea of solo travel was misguided. I incorrectly assumed that people who travel alone do so out of necessity, until I found myself growing restless, craving adventure, and surprisingly, solitude. My desire to travel alone wasn’t borne from personal tragedy or anything one could describe as ‘life-altering’. It came from the need to prove that I could travel to a new destination with no one’s company but my own, even as my friends and family insisted that I wouldn’t be able to hack it.

I started scanning through travel websites to find a destination ideal for my maiden solo trip. Something scenic and lively, preferably with water and other sports activities available, and not too far from home the first time around. I read a number of articles and talked to women traveller communities online for suggestions. Overwhelmed by the sheer volume of options available, I grew increasingly confused until a fellow traveller came to my rescue. She recommended Rishikesh, in Uttarakhand. This small pilgrim city sits on the banks of the River Ganges. It offers several homestays for tourists and has great spots for rafting and other adventure sports.

My research on Rishikesh led me to Jumpin Heights, India’s first extreme adventure zone and highest bungee jumping platform in the Puri Garhwal district of Uttarakhand near Rishikesh. I’m deathly afraid of heights, but I was on an adrenaline-fuelled roll and suddenly, bungee jumping off an 83-meter cliff didn’t seem so daunting. I signed up for it immediately, not allowing myself time to chicken out. It was a special occasion as Jumpin Heights was successfully completing 50,000 bungee jumps.

Here’s my experience of being taken over by fear and ultimately overcoming it.

In the days leading up to the trip, I booked a room at a hotel near the jump site, regularly checked up on the weather to pack the right clothes and shoes, and made a loose itinerary for the 2 days I planned on being there. Finally, I was ready to embark on my solo adventure! Upon reaching Rishikesh, I checked in and then made my way to the local market, and the famous Lakshman Jhula, a suspension bridge across the River Ganges. The locals were incredibly warm and friendly, and my anxieties disappeared in their company.

The highlight of my trip was no doubt the jump. Here’s my story… 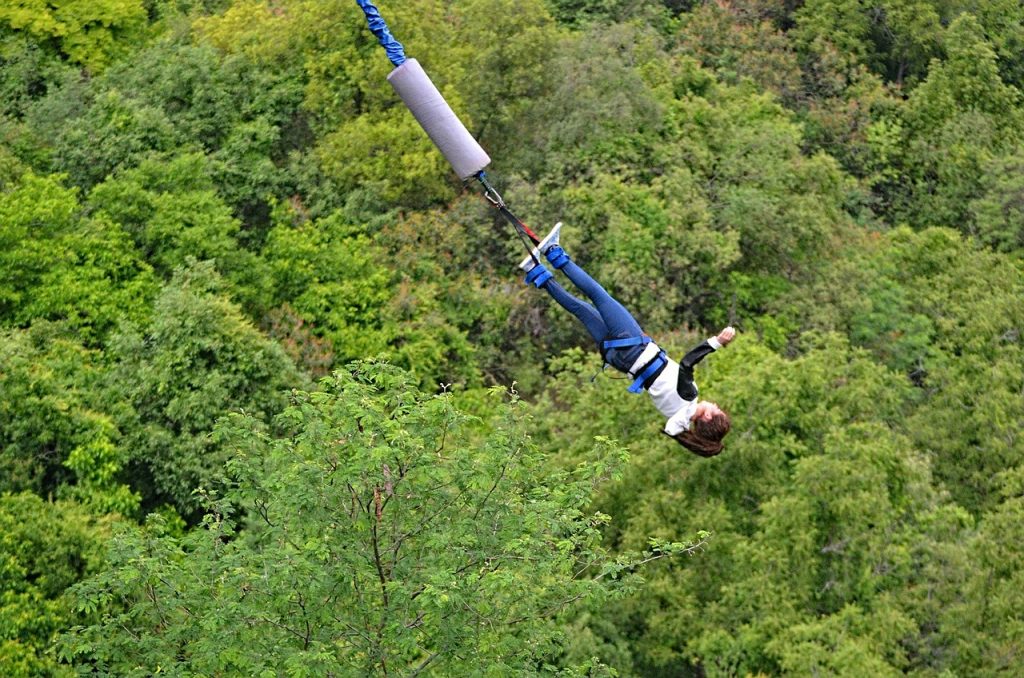 My hands were shaking wildly and my heart was beating faster than I ever thought it could. Even after all the safety checks had been done and my body securely harnessed, I couldn’t help but think, “I might die today!”. I waddled to the ledge, both my legs bound together, as the countdown began. Before I knew it, I was airborne.

As I fell through the sky, I realised I had left all my fears back on that ledge. The fall had taken me to a different world, where nothing was stable or familiar. I surrendered myself to these surroundings instead of trying to control them. After almost a minute of adrenaline-pumping excitement, the jump was over. Two people waiting near the river pulled me down to an awaiting deck. My harness was removed, a water bottle was provided along with a certificate that said, “I have guts!”. 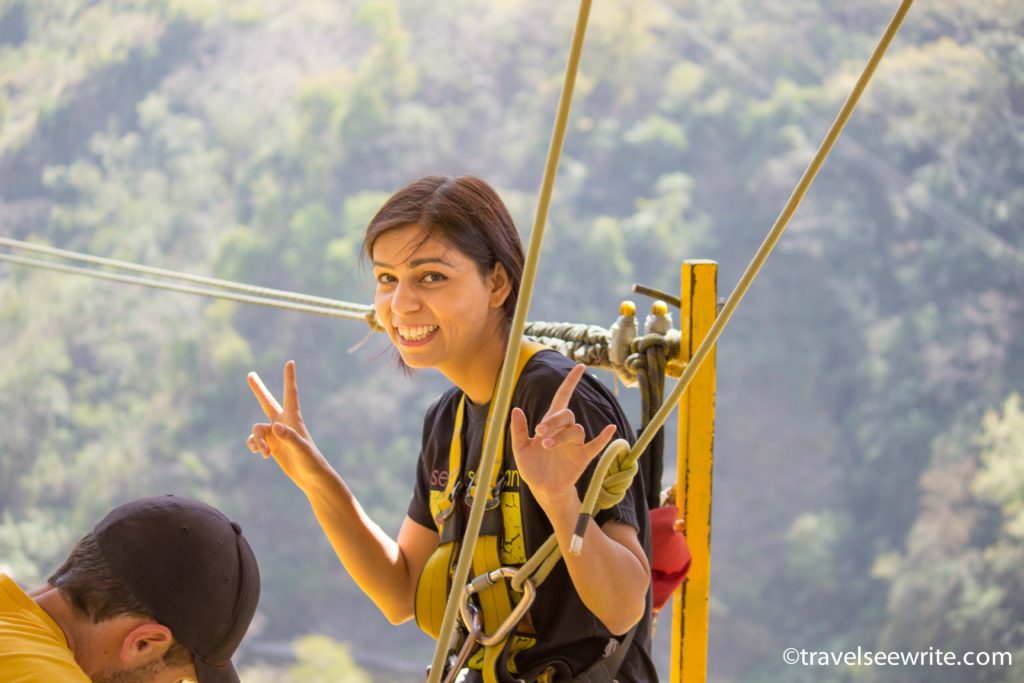 Bungee jumping was one of the most physically grueling challenges I have ever overcome. Even though I was scared to death, I realised it had a profound effect on my life. It gave me the confidence to go after the things I want.

As a woman, there are certain physical hurdles that are simply unavoidable, but you just need to take some extra precautions and be on your way. For example, it is best to wear tampons and carry an extra change to the bungee jumping spot. Keep calm and follow the expert’s directions. Do your own research about the destination, and keep a few local emergency numbers handy.

You are all you need Travelling solo is a choice that you have to make consciously. It is incredibly rewarding and allows you to discover parts of yourself that were hidden half in shadow. It makes you confident and fearless in crucial moments of your life and inspires you to conquer your fears.

For me, it was breaking the monotony and taking up something that I had never done before. It was a great stress-buster and made for a quick weekend getaway in the foothills of the mighty Himalayas. Even today, whenever I feel overpowered and helpless, I go back to the moment I leaped off the cliff. That jump still gives me the mental strength to tide over any problem.

So, if you’re planning on travelling alone, go for it; trust me, it’ll be worth it.

This story was published in two publications